September 12, 2012 by Robin Adam Page, Circus of Fleas, fleaBITE, Gil Eva Craig, San Francisco Bathhouse, Wellington International Ukulele Orchestra
I like working by myself, but for the new fleaBITE project, CIRCUS OF FLEAS, I wanted a collaborator. Someone to bounce ideas off, lift the songs up to a new level and generally have fun with.
Audio engineer Gil Eva Craig suggested Adam Page.
Gil mixes the live shows of the successful Wellington International Ukulele Orchestra, and Adam had shared the bill with them at a performance at the San Francisco Bathhouse. The three things she told me about Adam were a clincher.  He was an award winning Australian musician, he was musically inventive – he had even performed one song using only his beard, and he had a shaven head and obscenely long beard.  I liked that he was from foreign parts, that he had a flamboyant and quirky style, and that he harboured facial hair that would attract fleas.
I am not a natural ‘networker’ but on this occasion I summoned courage and rang Adam.  We met at a café and, although he was insanely busy, he said he might be interested in working on a couple of songs. He told me he had been moving between Australia and New Zealand for the past couple of years to pursue collaborations with Riki Gooch (ex Trinity Roots) and composer John Psathas.  I was impressed on both counts.
The next week Adam popped up to my home studio and we sat together and listened to demos of the new fleaBITE songs.  After each track I noted down Adam’s suggestions, becoming increasingly excited as I actually agreed with 99 percent of them.  He must also have felt inspired, as he ended up wanting to work on the whole album.
As mentioned, Adam’s diary is bulging with band rehearsals, tours of New Zealand and Australia, composing and recording gigs. Eventually he found a spare week or so where he could squeeze us in.
We devised a way of new way collaborating, well, new for me at least.
I emailed him files for each song, then Adam worked in his own studio, sending me daily updates, and finally I collected the new files he had created and imported them into the original demos.  Previously I had only ever worked with someone in the same room.
Adam is best known as a mighty saxophone player, but he also plays a mean bass line, has a flair for Latin rhythms, and generally is an all round groove-meister who works very quickly.  He was the perfect complement to my strengths of lyrics and rhythm, and right at the end I discovered he also has a fruity bass voice, which I wished I had known about earlier.
Check out our fruitful collaboration on the new album CIRCUS OF FLEAS:
www.fleabite.co.nz 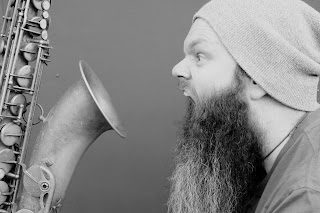