WHERE DO YOU GET YOUR IDEAS FROM?

November 7, 2014 by Robin
fleaBITE, Ideas, Inspiration, Kiwi Music, music, New Zealand, New Zealand music, Song Writing, The Jungle Is Jumping, Writing
I am often asked this question.
I always find it slightly odd… as if ideas can be purchased from a shop.
(“I’ll have three ideas thanks…. and a gobstopper”)

The truth is that I probably have too many ideas…small and friendly, weird and quirky, hairy, bald, upstairs and downstairs.  I really am a bundle of ideas squeezed into human form, desperately trying to remain grounded and not float off on some tangent like an escaped balloon.
The enemy to a good idea is thinking. If by some miracle you can clear the deck of plans, judgements, wants and needs, that’s a perfect start.
The best ones come when I have no intention of having an idea. Often while out walking.  I think the physical rhythm is helpful, especially for musical ideas. Being outside helps, and travelling solo.
And once you’ve caught a good one (thank you iPhone), the real fun begins as you create a structure or a story or an intention around the idea. As with most things in life, the songs that come with least effort are usually the best.  They seem to ‘write themselves’.  This is a relatively rare phenomenon that should be treasured. With the others, it’s more a matter of patiently trying things out in your darkened studio with your bright little idea hovering overhead. Adding and subtracting, rotating and reversing, polishing and streamlining an initial idea till it appears simple and shining.
Here, in short, is the initial inspiration behind songs on the new album THE JUNGLE IS JUMPING:
1.     Do The Woopsie – a beach walk, a clear sky, a vague intention to invent a dance like the old ‘Do The Hokey Tokey’ they used to play at skating rinks
2.     Little Miss Mosquito – being attacked by a swarm of mozzies while watering the garden on a summer evening
3.     The Jungle Is Jumping – trying to stay awake while driving back from WOMAD on a windy afternoon in March…over stimulation and tiredness
4.     Lady Luck – a rare moment of good will to humanity
5.     Don’t Believe What I Say – I’d like to say the pre election blather but that’s not strictly true
6.     Peel Me – apparently they do grow potatoes in Africa
7.     No Toast – nonsensical words that appeared unbidden on a walk by the sea
8.     Real Good Time – a desire to provide light relief to the other songs with a feel good song
9.     Get Out – fleaBITE goes techno… in your face, sound effected thumpery with a message
10.  Paradise – I could say PMT, but that doesn’t sound very child friendly
11. In Your Pyjamas – we are small, the universe is vast.  Go outside.  Look up.
12. Pom Pom Song – nothing like an outdoor summer salsa dance class where you are partnered with an 82 year old to get the Latin juices flowing
13. Need The Bees – we just do

If you have an open mind, artistic inclination and like to journey off the beaten track, let me introduce you to a delightful addition to the New Zealand art world.
My friend Stuart Shepherd has created a visual carnival.  In Te Aroha.
Yes, amongst the unassuming wooden houses lining the quiet streets of this small New Zealand town (about half an hour’s drive from Hamilton) lurks the newly opened New Zealand Folk Art and Design Gallery.

Once you get over the unexpected novelty of finding such a fabulous collection of art objects and curiosities in such an unlikely place, you discover there is a logic to Stuart’s choice of venue.  First of all, it would be hard to afford such a beautiful old wooden church (circa 1920s) in downtown Auckland.  And secondly, while Stuart has lived in New York for many years, and curated shows throughout the USA and Europe, he was weaned on the aesthetic of small town New Zealand A&P shows (Agriculture & Produce), and his gallery echoes that carnival atmosphere.

Stuart’s career to date has had him teaching Fine Arts at Massey University by day, and championing the work of New Zealand self taught artists by night. He has had particular success getting the work of unknown and obscure New Zealand artists into the American Folk Art Museum, New York Outsider Art Museum, and Mad Musee in Belgium.
Now he has dropped the mild academic Clark Kent façade, and is the super man of New Zealand folk art.  Three cheers for him.  But what exactly is NZ folk art? In this case it is a unique art collection resulting from years spent trawling through the best museums and worst junk shops. Stuart is drawn to various outlets of local (folk) creative expression including old painted signs, letterboxes, medical models, puppets, and paintings of all kinds.  You will notice a particular interest in objects from the 1930’s and 1950’s, as well as contemporary installations.  In short, he displays whatever tickles his fancy, and the result is very entertaining.

He also features New Zealand artists that he has developed relationships with over the years…names that you probably haven’t encountered via the usual art institutions. There’s retired civil servant Ray Ritchie who recycles materials into quirky narratives; Robert Rapson, a self taught ceramicist specialising in table top ships, and Reece Tong who creates tribal pictograms. Stuart took the work of all three to the 2009 International Outsider Art Fair (sponsored by the American Folk Art Museum in New York).  It was the first time New Zealand art had ever appeared, and Stuart was rewarded with an enthusiastic invitation to showcase more New Zealand art at the Fair the following year, while the artists were invited to showcase their work in other reputable galleries and museums throughout the USA.

And here’s some more examples of the art on show:

June 30, 2012 by Robin
fleaBITE, Gil Craig, New Zealand, Sheep, Shelley The Sheep
Driving through the lush green New Zealand countryside I had a feeling that something was lacking. It took a while to realise that the missing ingredient had four legs and was covered in wool.
The big joke about NZ used to be that the small population of people was greatly outnumbered by millions of sheep, and we were the butt of numerous sheep shagging jokes (especially from our cousins in Australia). Tourists were herded to demonstrations of sheep shearing, and at home granny sipped sweet sherry and knitted jumpers (jerseys) and socks as birthday presents. Followed by roast lamb for Sunday lunch.
These days the number of sheep has steeply declined, and farmers now produce dairy products till the cows come home. New Zealand seems to have become one big milking shed for the overseas market.
Anyway, to comfort myself for the lack of ovine company on this particular road trip I sang a little sheep mantra to pass the time. This became the basis of the song SHELLEY THE SHEEP (on the new fleaBITE album).
Several months later, my audio engineer Gil Craig and I were mixing the sheep song. After a couple of hours of hearing the endless sheepy mantra, Gil suddenly dived into her woolly reservoir of repressed memories and came up with the fact that when she was a child she had in fact had a pet sheep.  Called Shelley.  Well stone the crows, what a co-incidence! Unfortunately Gil’s pet sheep met an unfortunate end.
So please raise your mint sauce to SHELLEY THE SHEEP, with  the hope that sheep will once again rule New Zealand, and the glories of wool will be sung loudly throughout the galaxy. 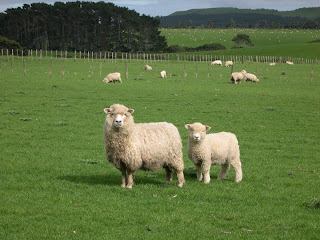